NBPA congratulates our very own past President Carmen Lineberger!

In January 2020, Assistant United States Attorney Carmen Lineberger was selected to serve as the Managing Assistant United States Attorney for the Fort Pierce Branch Office!!! Ms. Lineberger has been a federal prosecutor in the Southern District of Florida since 2008. Prior to her work as a federal prosecutor, Ms. Lineberger was an Assistant District Attorney, in the Homicide Unit, for the City of Philadelphia, Pennsylvania. She also previously served as a Deputy Attorney General, in the Asset Forfeiture and Money Laundering Section of the Pennsylvania Office of Attorney General. She is a graduate of the University of Pennsylvania and earned a J.D. and L.L.M. from Temple University Beasley School of Law. Following law school, she was a law clerk to the Honorable Berel Caesar, Philadelphia Court Of Common Pleas-Civil Division. In her role as Managing United States Attorney, Ms. Lineberger will supervise the Fort Pierce Branch criminal prosecutors and support staff.
Carmen is been extremely instrumental in the growth of NBPA. We are proud of you Carmen!!

Our very own Mercedes Maynor-Faulcon will be honored with the Napier-Looby Bar Foundation’s Justice A.A. Birch Outstanding Service Award

The NBPA’s Charles B. Morton Jr. South Florida chapter has joined several other minority voluntary bar associations in calling on Florida Governor Rick Scott to appoint more judges of color.  “It is important that the judiciary reflect the community which it serves, and the lack of diversity currently on the bench in South Florida can no longer be ignored,” said Maryam Adeyola, President of the NBPA’s South Florida chapter.  See the article here.

Kristi Hester, of the Riverside District Attorney’s Office (California), reviewed the National Protocol for Sexual Abuse Medical Forensic Examinations: Pediatric( Pediatric SAFE Protocol) on behalf of the NBPA.  The United States Department of Justice (USDOJ), Office on Violence Against Women (OVW), in partnership with the International Association of Forensic Nurses (IAFN) created these protocols to supplement the National Protocol for Sexual Assault Medical Forensic Examinations: Adults/Adolescents 2nd ed., by specifically addressing the needs of the prepubescent child that has experienced sexual abuse. You may review the protocols here. 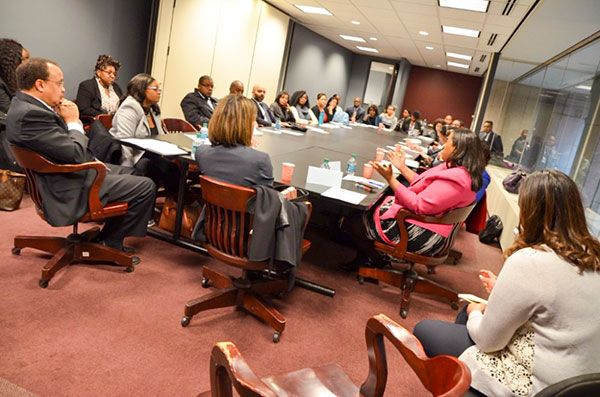 The NBPA Chicago Chapter hosted a Supervisor Roundtable and a panel discussion entitled “Road to the Robe”.

Will Jorden, Southern Regional Director, has created a Junior DA program for students in Baton Rouge.

Congratulations to NBPA member Diane McFarlane on her promotion to Eligibility and Planning Officer of the Paratransit Division of New York City Transit (MTA).

Congratulations to Former Southeast Regional Director Kiesha Storey, who has been appointed by the Georgia Governor Nathan Deal as a Judge in the DeKalb County State Court, Traffic Division! We are so proud of you, and wish you all the best!

Immediate Past President Bruce Terry Brown was quoted in The Guardian on the need for more African American attorneys.  See his comments here.